A little something about the band

George Petrich is pleased to present… Sophisticated Swing, one of Cleveland’s premier 18-piece swing bands. As he has done many times, George has gathered a talented bunch of musicians from all parts of Northeastern Ohio. Their job, to make your affair the most enjoyable evening you have ever experienced. The band’s playlist features a long and varied selection of music, from the big bands of the great swing era to the comtempory music from bands of the post-war era.

Sophisticated Swing is not just your average dance band. We have a lead vocalist, but don’t be surprised to find another member of the band stepping out from behind their music to give you a treat at the microphone. We also enjoy playing pieces that require the appearance of The Sophisticated Singers, a collective ensemble of singers that will bring back the sounds of the old big band vocal groups, like the Modernaires or the Pied Pipers – just a little something to make your night special. 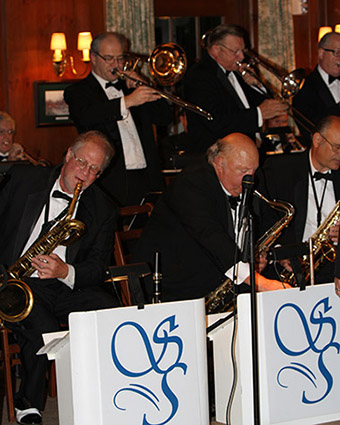 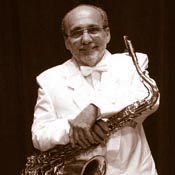 George has long been a figure in Northeast Ohio and the Midwest. Born and raised in Cleveland, he got his start in the early ’60s. After performing in many small groups, George joined the areas premier big band, Nightcoach, where he soon became partners with bandleader, Mr. Bill Moore. Nightcoach played engagements at every major country club and social event from Buffalo N.Y. to The Country Club of Detroit.

After leaving his partnership with Bill, George went into jazz education from 1986 to 1989. One of his more notable project was The Cleveland Cavaliers Big Band. The band was comprised of a group of high school students from 7 different area schools. They performed regularly at Cavs games at the old Richfield Coliseum. Being a member of the National Jazz Educators, George traveled with this group to many high school competitions where they earned top honors. Also, in the mid ’80s, George joined the Jimmy Dorsey Orchestra under the direction of Lee Castle. George played in Lee’s sax section until the early ’90s.

After taking several years away from the music business with the encouragement of his wife and daughters, George took on his newest project in July of 2005 when Sophisticated Swing was born. Ladies and gentleman grab your dancin’ shoes because it’s time to swing one more time to the sounds of Sophisticated Swing. A sure bet to make any event you have a night to remember.